What can we say to start but offer a warm thank you to all that have been our friends and supporters over the years?

So, thank you — all of you. From the Animation business stand point; it has been an honor to carry the torch from the time when Maverick Studios (note that the name had “ck” originally) was founded by Robert Valley in 1994. Since then it has been a welcoming place to many artists in the community looking for inspiration and a place to hunker down. It has been a revolving door of talent and an important place for networking.

Our doors have indeed closed and as it has been said lately, "an end of an era". Times have changed, technology has blossomed and the animation industry has suffered in some ways, but gained in so many ways. It isn’t the intent here to get into the business aspects of the Maverix Studios era, but more a reflection on its positive contributions that we hope will be remembered throughout the art community in the Bay area and perhaps beyond.

We will never forget how so many came forward for the causes as we proudly sponsored benefit auctions, ranging from helping a friend with medical bills and disaster relief to the cure for Alzheimer’s and cancer. It has been truly humbling.

We also won’t forget the friends and colleagues (many of them new friends we’ve made) that shared the office space, offering trust and companionship. We’ll miss those that dropped in from time to time just to say hi.

There is a lot to miss about Maverix Studios and lot of fond memories to hold dearly.

But; one should never say never, right? The spirit of Maverix Studios will live on; we have no doubt. And someday, somewhere we will all be together again doing what we do best, inspiring, networking, and having another successful fundraiser for the next great cause!

Love and best wishes to all, 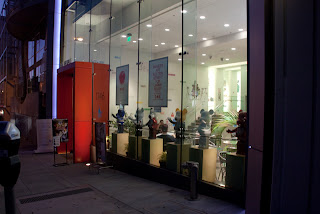 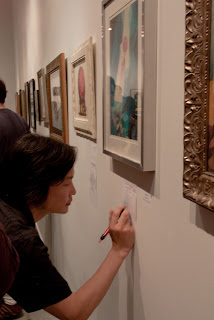 One,ひとつ was a HUGE success. All 50 pieces were sold ~! 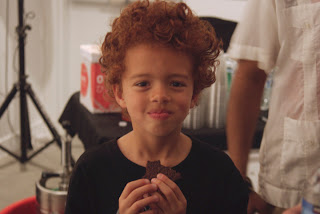 Many thanks to all the donating artists, the volunteers and special thanks to Dice ,all the Maverix Members for their work and Seiji Horibuchi of New People for letting us use Superfrog Gallery for the event.

Thank you also to the hundreds of people who came to the show.

Considering we only had a few weeks to prepare, it is an amazing success!! 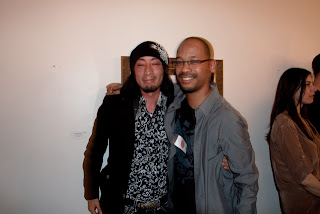 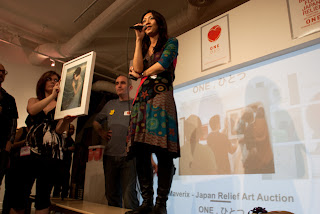 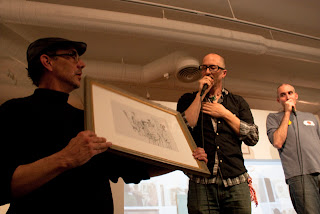 Thank you so much to everyone who made it to the ONE event Many of you donated precious art , donated generous cash , bought the awesome art , donated time and helping hands or bought things at the merchandising tables , we all together- as one- helped raise a good number of dollars , a lot of help , for Japan 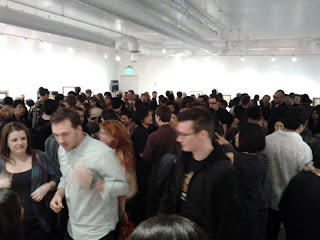 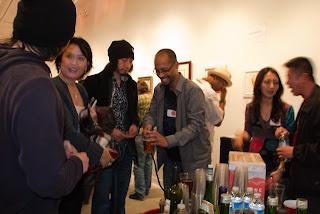 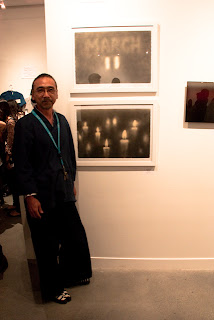 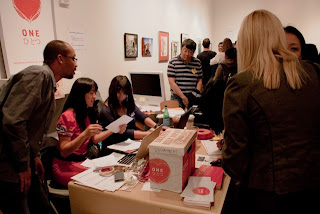 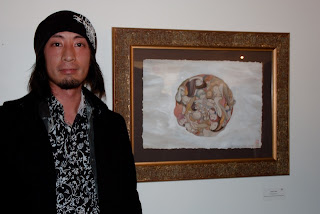 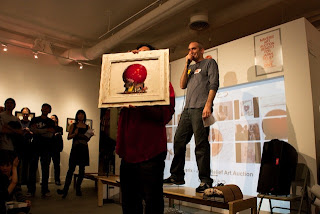 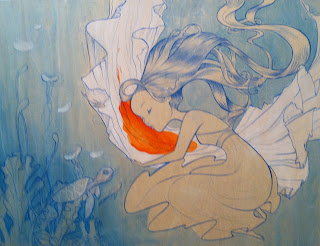 Another exquisite piece from Sho Murase!

During the last several years Sho has been working in studios across London, Barcelona & San Francisco as an illustrator, animator, designer and storyboard artist.

In addition to her animation work she has been a part of several gallery shows and creating graphic novels.
Her fist color graphic novel “SEI” was published by Image Comics in November 2003. Since then she illustrated covers for comics and many graphic novels, including the Nancy Drew serie 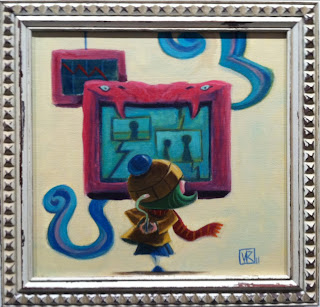 Vaughn Ross is contributing this thoughtful acrylic at the art auction.

Vaughn Ross is a story artist at Lucasfilm.

Vaughn is a character designer, animator and illustrator.

Posted by Tom Rubalcava at 2:22 PM No comments: 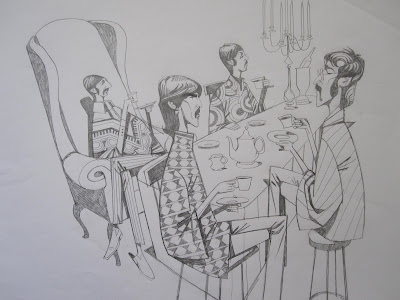 Robert has been directing animated commercials and music videos for the past two decades,  working in projects such as Gorillaz
Posted by Sho at 11:20 PM No comments: 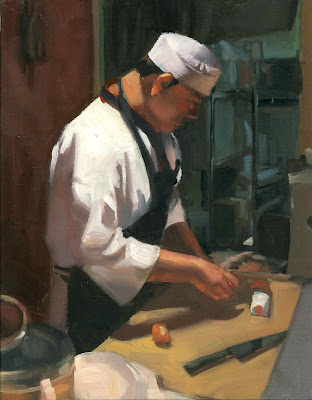 She is currently working as a visual development artist at Disney animation Studios
Posted by Sho at 3:04 PM 1 comment: 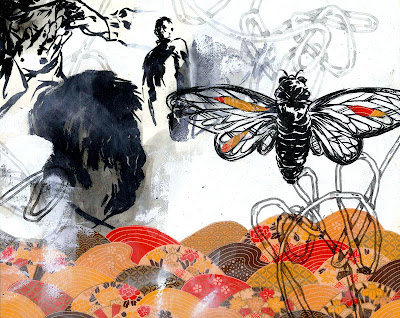 Artist: Meghan Jean Kinder
Title: "Cicada Song"
Media: Mixed Media on Panel
Size: 10 x 8 inches
Phone: 503-501-6642
Website: http://www.meghanjean.com
-"The images of Japan that flooded the media after the disaster were hugely upsetting; People terrified and displaced among the destruction of their homes. But incredible stories of bravery, humanity, and triumph emerged, too. Like those stories, cicadas are a symbol of re-birth. In Japan specifically, their sound signifies the summer season as they emerge from the ground to sing, re-born."-Meghan Jean Kinder
Posted by Sho at 2:49 PM No comments: 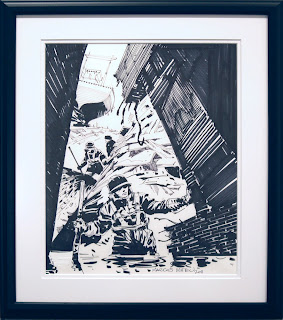 Marcos Mateu's bold blacks and composition stand out in this one.

http://marcosmateu.blogspot.com/
Posted by Tom Rubalcava at 12:49 PM No comments: 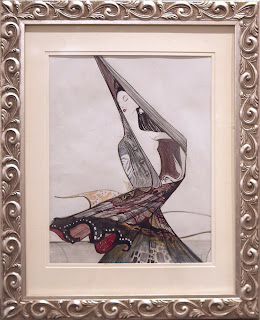 Ed Bell is a filmmaker, director, animation artist and designer. A native of South Central Los Angeles, he went to California Institute of the Arts for their film and video program. Since that time he has been involved in bringing art to life in various forms. His directing and artistic credits include both film and commercials for clients such as HBO, Warner Brothers, Disney Features, Nike, Sony, and BBC Television. He is an affiliated commercial director with Special Agent Productions, and is currently collaborating on a graphic novel with comedic horror writer, Michael Boatman.
http://houseofmanycolors.blogspot.com/

Posted by Tom Rubalcava at 12:41 PM No comments: 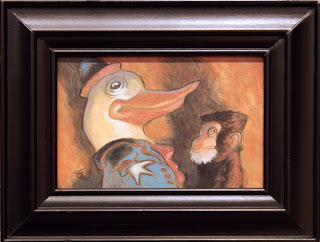 Steve Purcell has given us a mysterious, yet charming piece to salivate over.

Steve Purcell is a cartoonist and writer, best known as the creator of comic book characters Sam and Max. He is currently employed in the story development department at Pixar.

http://spudvisionblog.blogspot.com/
Posted by Tom Rubalcava at 12:24 PM No comments: